Where Does the Stuff in the Blue Bin Go?

We see them every week. Those monster gray and red Athens trucks with giant metal arms that reach down to grab bins holding tons of garbage, yard waste and recycling Altadenans throw away each week. And the stuff in the blue bin, where does it go? What happens to all the milk cartons, cardboard boxes, junk mail, soup cans, milk jugs, pasta sauce jars that were in our kitchens for a short time then relegated to the blue bin? Is it really recycled? Yes, for the most part. Does most of it end up in landfills? Not in Athens’ case. Does it go to China? Not anymore.

What follows is just a bit of what Mark Goldschmidt, editor of this newsletter, and I saw when we took a tour of one of Athens’ recycling centers. Leading the way was Brian Hunter, the Operations Manager and Jessica Aldridge, Director of Sustainability. If any of you have an opportunity to take a similar tour – do it! It will change your view of our consumerist society.

First, don’t call it a “recycling center.” Those in the business call it a “Merf” short for “Materials Recovery Facility” or MRF.

Athens has three MRFs. One in the City of Industry and two in Sun Valley. We visited one of the Sun Valley facilities, 17 miles west of Altadena, which opened in 2014. The facility is a huge LEED certified  80,000 square foot, three-story building full of roaring machines. Athens still needs more capacity, and is building a fourth MRF in Irwindale. 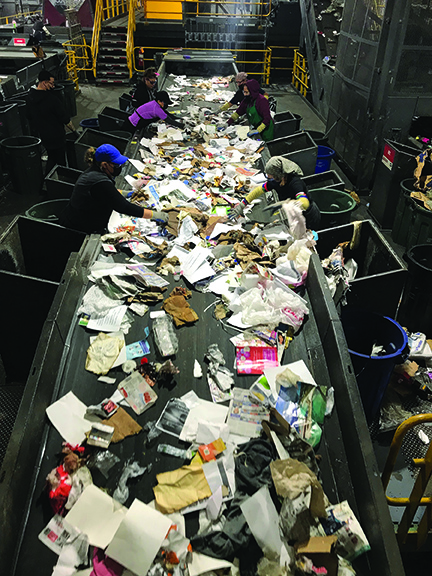 What happens to your stuff when it arrives at the MRF?

Trucks arrive and drive onto the scales? A code reader identifies each truck, and automatically registers its route and payload. A detector next to the scales senses anything radioactive. It’s rare, but does happen from time to time. Usually it’s medical waste.

The truck then enters a cavernous indoor area and dumps its load on the “tipping floor”. A tractor-like machine with a big “claw” fluffs up discarded stuff that has become compacted. Workers spot and remove hazardous waste and large non-recyclable items. Would you believe that people have actually put bowling balls in the recycling?! This is not only stupid it’s dangerous, when tipped from the truck it becomes a 10-pound projectile.

After a preliminary sorting, the rest is put on a conveyor belt. Since many people put their recycling in plastic bags, the first stop is the “Bag Breaker.” Rotating rubber discs rip open the plastic bags to let the recyclables out. Please, keep your recyclables loose in the bin. Bagging them just makes for more work, and plastic bags are not recyclable at the MRF where they are knows as “tanglers” that clog machines.

As the recyclable material continues its trip up a big conveyor belt the next step is to separate cardboard. Big discs turn and allow the small or heavier items like metal cans to fall below. The larger, lighter cardboard continues on and will eventually be “baled” into large cubes of for shipment. It will be made into new packaging.

After that, containers and paper are separated – they call paper “fiber.” This is where humans come in. Athens employs 1,730 people, many of whom work at the MRF’s sorting lines, tossing out contaminated fiber like wet paper or greasy pizza boxes. The belts move at 150 feet per minute, so workers – mostly women — sitting next to the line have to move fast. The smell is not terrible but not great. It’s rather “sour.” Throughout the facility, and especially at all openings to the outside and at roof vents Athens uses misters to keep smells and dust down.

It is noisy. I asked if employees on the line were allowed to listen to music or podcasts on ear-buds while they work. No, unfortunately that’s not allowed. If an alarm goes off or there is another danger, they need to hear it.

Next, the line passes under powerful magnets that capture cans and other ferrous metals. Lightweight aluminum cans are winnowed with a blower, then go to a crusher. By the way, it’s best if you do not flatten your aluminum cans. The sorters work best with uncrushed cans.

Now for plastics. These are tricky, there are so many kinds. You have probably noticed those tiny triangles imprinted on the bottom of plastic containers; they have a number in the middle from 1 to 7. With the help of a magnifying glass you can read them. But how do they “read” them at a MRF? The answer – optics. Light beams don’t read numbers. They read the composition of the plastic in everything from water bottles to shampoo containers. If you are a numbers reader like me, note that 1, 2 and 5 are the most re-useable. Number 7 is not good. Number 4s should go back to the store. Styrofoam is not recyclable.

Toward the end of the process, a system using artificial intelligence is able to identify desirables that may have slipped through the system. As Athens explains it: “Max-AI employs multi-layered neural networks, along with a vision system, to ‘see’ and identify objects similar to the way a person does.”

After a long trip through bag busters, conveyor belts, weight separators, optic detectors, magnets and human sorters the final “recovered” materials are ready to be pressed into bales. This happens on the lower level where the useable stuff has collected in various bins. Cardboard is pressed into huge bales then loaded into containers and trucked to domestic customers or to a port where it is shipped to other countries to be recycled.

Who buys the recycled material? This is a KEY question. Finding buyers, or “markets,” for the tons of recycled material is one of the biggest challenges that Athens and all waste service companies face. Of the 1200 to 1500 tons that arrive daily, 50 to 60 per cent is normally “marketable.”  The bales of cardboard, cans and plastic are a commodity, but the market can shift. Constant change is part of the challenge. For example, for decades China took a huge amount of America’s cardboard. The ships that brought Chinese goods to the Port of Los Angeles would return with tons of American cardboard. But in 2018 China suddenly announced it would not take any more American cardboard. (Contamination was a big problem.)  That left America’s recyclers having to scramble for new customers.

Fortunately, part of the problem has been eased with an increase in demand for cardboard for home delivery by retailers like Amazon. Glass and much plastic is recycled domestically. Athens says it was not hit too hard by China’s new policy, since most of its cardboard was uncontaminated and still desirable. Athens’ international customers include Indonesia, Malaysia, Thailand, Korea, and Taiwan.

Aluminum and metal are very marketable. The challenge comes with plastic. Trying to find a market for plastics is tough because they contain so many different ingredients. Plastics are hard to break down and process into new products, so it’s often cheaper and easier for companies to use new virgin plastic. It’s hard to avoid plastic, but the people at Athens let us know they think we should all try!

Some of it. Athens says 50 to 60 percent of what they receive is recovered for reuse and a new life (less on rainy days when much comes in wet and unusable). Yes, some of what customers put into the recycling should have gone to landfills in the first place, and now it has to be hauled to one from the MRF.

Waste management is always evolving, it’s not just market forces, it’s also legislation. The next big step for Altadena residents will be organic waste recycling. This means that soon our food scraps can go into our green bin along with yard and landscaping debris. Watch for an announcement of this change!

All this costs money

Athens wouldn’t say what it costs to run one MRF for a year, but it seems likely that the materials mined from our waste cover only a fraction of that. Most of the money comes from Athens’ 250,000 customers, like me. In 2015 I paid $230 for a full year of service. In 2021 my bill will go up to $392. (I have no special discount.) Over those seven years my bill rose an average of $23 or 8% a year, which is well over the inflation rate.

The letter we get from Athens each year says the increases are due to “changes in the Consumer Price Index, fuel prices, and solid waste disposal fees… These rates were calculated in accordance with the terms of the franchise agreement and reviewed by the County of Los Angeles Depart of Public Works.” Athens’ contract is with the County of Los Angeles and covers service to more than fifty communities in various cities

As I said, I don’t see these costs going down in the foreseeable future. 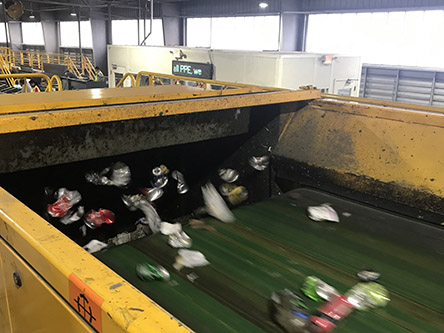 Separating our recycling is a complex process involving a series of chutes, conveyor belts, tunnels, detectors, bins, blowers and some very sophisticated technology – plus human beings.

When I saw the tremendous amount of work and energy required I realized how important it is to REDUCE the amount of packaging we consume in the first place. Avoid products in plastic containers like cherry tomatoes or grapes. Buy in bulk whenever possible. Get rid of your plastic food containers and use glass jars for storing your food.

In short, send as little as possible to the MRF in Sun Valley. What you do send, be sure it is recyclable. Please, no bowling balls.

A super useful website for all your recycling questions: canirecyclemy.com

To watch video of everything I’ve described go to: