What’s Going On With Altadena’s Air?

Air pollution smells bad and looks bad;
it also makes us sick and shortens our lives.

The California Air Resources Board (CARB) defines air pollution as “any substance in the air that is harmful to people or the environment.” The two worst pollutants are fine particulate matter 2.5 microns in diameter or less, called PM2.5, and ozone. Both are primarily by-products of the combustion of fossil fuels, and both are components of smog.

Altadena has higher PM2.5 levels than about 60 percent of census tracts in California on the California Healthy Places Index; our average PM2.5 level is 10 micrograms per cubic meter. During the Bobcat fire (that sickened many) last summer, levels reached the 400s. Not doing so well with ozone, either: Altadena’s levels are higher than 77% of California census tracts as onshore winds over the LA basin blow pollution until it is stopped by our front range, which traps it and other pollutants.

Altadena Heritage has committed to educate the community on what we can do locally about problems affecting health and environment. We are in the third year of an SCE grant called “Combating the Urban Heat Island Effect,” which targets the most effective actions to lower temperatures — which, coincidentally, also improve air quality. We’ve focused on planting trees and limiting/eliminating use of gas-powered small off-road engines (SORE) such as gas leaf-blowers, two actions that reduce air pollution.

Low prioritization of regulating these small gas engines in California has brought us to an unfortunate benchmark in 2021: SORE now produce more smog-forming pollutants than all passenger cars in the state. [Numerous studies have shown PM2.5 and ozone significantly shorten human lifespans, primarily through cardiovascular disease and lung cancer, but also through other conditions]. Pollution is linked to more premature death than smoking, HIV/AIDS, malaria, and even war. In 2015, 8.8 million people globally died early because of air pollution; smoking caused 7.2 million premature deaths.

The following summarizes the main villains fouling our air: PM2.5

Particulate matter (PM) is a term for a mixture of solid particles, liquid droplets, or a combination of the two, suspended in the air. PM 2.5 (measuring 2.5 microns or less in diameter — for scale, the average human hair is 75 microns in diameter) is the most problematic. When PM2.5 particles are inhaled they either remain in the lungs or are absorbed into the blood stream because they are so small, causing far worse effects than larger particles such as ordinary dust. PM2.5 are mostly generated by combustion of gasoline, oil, diesel, and wood, either directly emitted or from gases and organic compounds combining in the atmosphere.

By 2030 residential wood burning is projected to be the single largest source of PM2.5 (sometimes called black carbon) in California. The Southern California Air Quality Management District (SCAQMD) addresses this by sending out “No Burn Day” alerts when high levels of PM2.5 are predicted. SCAQMD also has an incentive program to replace wood burning fireplaces with gas-burning ones.

Larger particulates such as PM10 (10 microns or smaller), including dust, pollen, smoke, and fragments of bacteria, can also cause tissue damage and lung inflammation, but being larger, particles tend to lodge in the larger upper airways of the respiratory system. They are a health hazard and can be irritants, but are not absorbed into the bloodstream and are less dangerous than PM2.5.

Ozone is a major component of smog. Nitrogen oxides and volitile organic compounds (VOCs) produced by fossil fuel-burning engines, factories, consumer products, paint evaporation, and other sources undergo chemical reactions to form ozone and other components of smog. UV light and heat accelerate these chemical reactions. Conditions for smog formation are perfect in summer when an inversion layer covers the Los Angeles basin, trapping and cooking pollutants in the sunshine.

Ozone is a powerful oxidant, it can kill living cells on contact. People vary in health susceptibility to ozone, but high levels in our atmosphere can damage tissues of the respiratory tract, and cause inflammation that reduces the volume of air inhaled. It also damages plants, rubber, and plastics, and has deleterious effects on pets, wildlife, and insects. Ozone has a characteristic odor which some people can detect at low levels. Altadena’s high ozone levels need addressing. Catalytic converters have reduced the overall ozone level by 60% — yet it remains a threat to health. 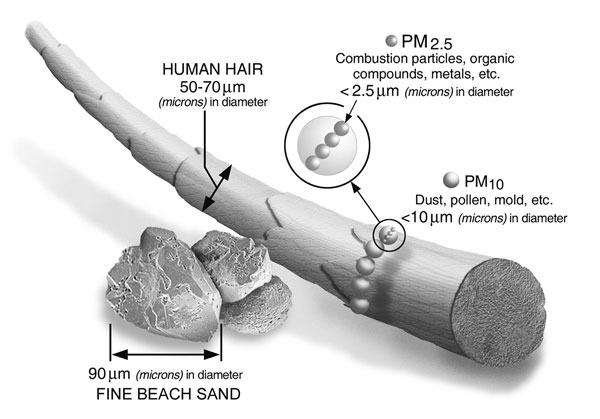 As motor vehicles become ever cleaner, small off-road engines (SORE) such as 2 and 4-stroke engines powering lawn and garden equipment use technology that has not improved in a long time. One hour of a noisy gas leaf blower produces as much smog-forming pollution as a 2017 Toyota Camry driving from Los Angeles to Denver. A four-stroke lawn mower does marginally better, polluting in an hour the same as that Camry driving from Los Angeles to Las Vegas. This is because regulations that mandate how much pollution passenger cars can emit have gradually led to today’s cars being 99% cleaner than in 1970. In the same period, SORE have proliferated and are more loosely regulated.
There are more SORE in California (16.7 million) than light duty passenger cars (13.7 million) with 86% of them used in residential and commercial lawn and garden equipment. According to the SCAQMD, SORE produce more smog-forming pollutants than all passenger cars, and 8% of all VOCs released into the atmosphere of the South Coast air basin.

What is being done (and considered)?

California Air Resources Board’s mission is to protect the public from the harmful effects of air pollution, and to institute programs and policies to fight climate change. Historically, it focused on reducing motor vehicle emissions — because cars and trucks contributed the most PM2.5 and smog-forming chemicals. But now, greater focus on SORE is needed.
Because, even though we can celebrate having cleaner air today than in the 60’s and 70’s — LA County and the San Joaquin Valley still have the worst air quality in the country. Nine percent of Altadena children suffer from asthma, a disease strongly linked to air pollution. Data piling up moved the Governor to issue an Executive Order accelerating our state’s move to a low carbon, sustainable and resilient future. The most dramatic result of this so far is the decision to ban the sale of internal combustion engines in cars and light trucks in California by 2035.

CARB began setting emission standards for SORE in 1990 when there were far fewer of them; those sold today are 40-80% cleaner — if well maintained. But as comparing them with passenger vehicles makes clear, this approach has not kept up with the problem — and we haven’t even addressed sound pollution in this article.
The Governor’s Executive Order and community feedback have, however, led the agency to consider abandoning attempts to regulate SORE — and to move to requiring that manufacturers sell zero emission equipment only (with the exception of generators) by 2024. Altadena Heritage supports this position, and additionally recommends closing the loophole allowing gas leaf blowers an exemption from noise ordinances. If you agree, please contact CARB with your public comment! (sore2021@arb.ca.gov)

Yes, air quality has improved in Los Angeles County over the last 50 years, and yes, pollution continues to negatively impact health. CARB and SCAQMD chip away at pollution sources, encouraging the phase out of fossil fuel-burning vehicles and devices. But as climate change, air quality, and health crises converge, we need bolder, faster action from public agencies that exist to protect our health.