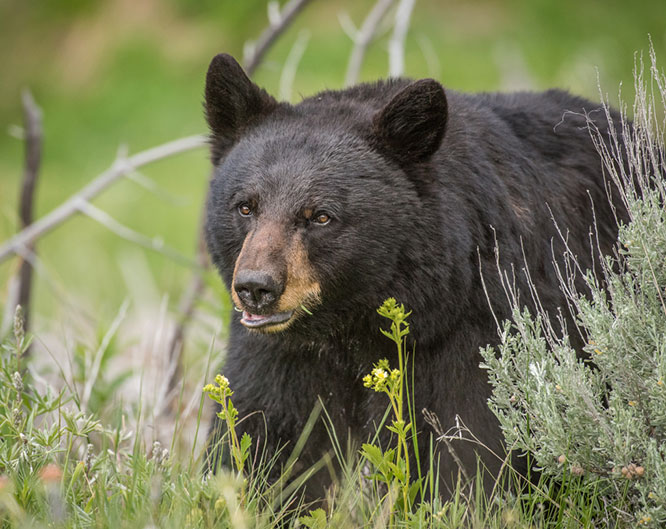 It’s ironic that the only grizzly bear in California is on our state flag. There have been no grizzly bears in California for a century, the last was shot in 1922 in Tulare County. It is the black bear that has made itself comfortable in our San Gabriels

The are called black bears, but they come in all shades, from dark brown to cinnamon. Black bears were widely hunted in the 19th century in Southern California, apparently to extinction. They were reintroduced in the 1930s when California wildlife officials moved 28 “problem bears” from Yosemite National Park to southern California; 22 were released in Angeles National Forest and six in Los Padres National Forest. They have thrived and multiplied, now there are now 30,000 to 40,000 black bears statewide. Small by bear standards. females weigh up to 175 pounds, males can weigh as much as 660 pounds.

Jessica West, a Human-Wildlife Conflict Specialist with the California Department of Fish and Wildlife, spends much of her time educating people about bears and how to interact –– or not interact –– with them “mostly managing the things that attract the bears, like unsecured food and water, bird feeders, fruit trees, and garbage. Over time the bears become ‘habituated’, their natural fear is diminished and that increases risky behavior.” Their natural diet is insects (particularly ants), nuts, berries, acorns, grasses, roots and other vegetation.

Unlike coyotes, West says “Overall people love the black bears. When you talk to folks about a bear entering their home they are so forgiving. They want to report the bear but don’t want anything bad to happen to it. ‘Please, don’t hurt them’ they say.” Department policy is to never harm a bear except when one is deemed “predatory,” a highly unusual situation. Officials will relocate a bear only if a homeowner has taken every precaution and the animal continues to be destructive. Where bears are about, it’s critical to secure trash cans and other sources of food. (There’s more advice for homeowners about bears at wildlife: ca.gov/Keep-Me-Wild/Bear

Bears can have very specific food preferences says West. “I’ve heard of a bear that raided a fridge that would take the chocolate cake but not touch the bacon. Another bear had taken to eating citronella candles. If they like a scent, they will investigate. We could tell which scat was his, it smelled like citronella-scented poop.”
Some people who love bears may feel a desire to leave food out for them so the bears stay healthy, but West says “don’t do this.” It just speeds “habituation” and bears that become habituated to hand-outs or garbage become nuisances.

Bears in the southern California foothills don’t hibernate, it just doesn’t get cold enough to make dens; they sleep in trees, on the ground, or even on patios. Prolonged drought and higher temperatures in California make swimming pools increasingly appealing to bears.

Mother bears usually keep their cubs for about two years, but when food and water become scarce they may separate from them earlier. Left on their own, the cubs are vulnerable to coyotes, bobcats, mountain lions, and even other bears. About one in five cubs don’t survive, but those who do live for an average of 18 years. It is legal to hunt black bears with a permit; given their healthy numbers, hunting has little impact on the overall black bear population.

If you encounter a bear while hiking or camping, first stand still. Do not approach it. Move away quietly in the opposite direction. Do not run, that can trigger a chase response. If the bear is cornered it will get fearful, so be sure to leave the bear a clear exit as you back away. More bear encounter advice at bearwise.org/bear-safety-tips/bear-encounter/

Over the nine decades since Ursus americanus californiensis was reintroduced in Southern California no human has ever been killed by this species. Wildlife officials would like to keep it that way.