“Almost like clockwork… I can count on it every 10 years,” Theo says, sounding philosophical. He’s referring to the wildfires that have forced him to evacuate his mountain home in Altadena four times since 1979. He moved out for three days for the Station Fire, and another three or four more recently. Theo Clarke, retired physicist and old friend who lives on 16 wild acres of a private inholding in the Angeles National Forest, is talking to AH News for our Wildfire Issue. He worked at JPL for 27 years, plays the violin, and appreciates every morning waking up to views spanning from Owen Brown’s gravesite, to Altadena, Pasadena and beyond — all the way to the Pacific on clear days. 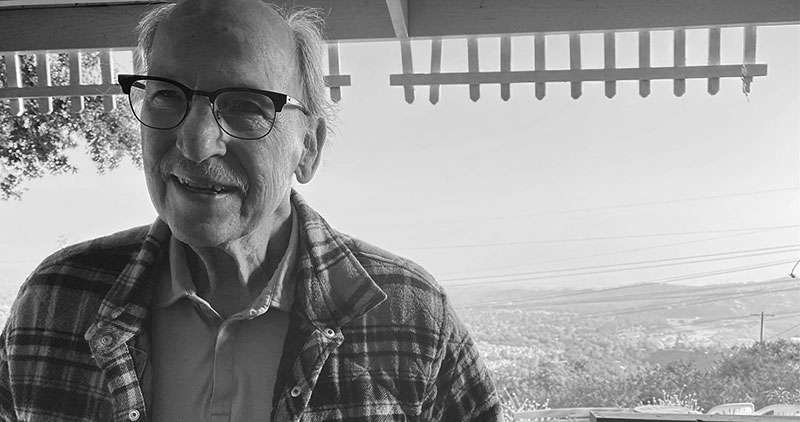 His rustic home sits at the end of the road on a shelf directly above La Vina, 272 homes built in the 1990s. Twenty-five years of landscape growth have softened and improved his down hill view, jarred for years by the shock of this development. His property includes land homesteaded in the 1880s by Owen and Jason Brown, sons of “John Brown the Liberator” of Harpers Ferry fame. Near the end of his driveway, the Brown’s long-gone cabin site is marked by a 1953 half-buried Plymouth, now sprouting with greenery and melding into the landscape.

This is fire country, and Theo is fortunate that his home has never burned. “I was convinced it was GONE the time before last, it was terrifying,” he said, referring to the 2009 Station Fire, when he watched from the bridge by Devil’s Gate Dam as helicopters swarming like bees dumped flame retardant (“red stuff”) on his property to protect it.

Theo’s place was used as staging area and field headquarters in that fire — several engines parked there as firefighters quenched hotspots with water drawn from a nearby reservoir. “I found out two years later what saved it, when a fire captain brought his crew up to show them the site,” he says. The captain described a discussion in which several firefighters opined that abandoning the site was the best option. “But if they let my place burn, nothing could stop the fire from racing down the half-mile slope to La Vina and wiping it out.” So instead, Theo explained, “they lit a fire to burn down the hill directly west of my place to create a firebreak. That fire burned west, reaching up the north side of Little Round Top. When the Station Fire approached from the north and west across El Prieto Canyon, there was nothing left to burn on the hillside next to his house and it survived.

To be on the site on this day — a cool, misty April afternoon with surrounding hills cloaked in shades of green — the horror of that close call is difficult to conjure. A few hikers amble by, visible through Theo’s living room window on the trail crossing his property. It is perhaps 20 feet from his home, atop the downslope where the intentional fire had been set to consume vegetation before it could feed the giant conflagration heading his way. Theo likes hikers: “They are my neighbors and my friends. In my experience they are good people, they have never bothered me. Just don’t park up here and we’re fine!”

Getting lost with a friend on a moonlit hike in 1977 first led him to this idyllic spot, which a month or so later he learned was for sale. He put $1000 down, lived on the property and paid rent in the year it took to finalize the sale. Theo has enjoyed good relations with hikers ever since, and has been a great supporter of restoring Owen Brown’s gravesite — on property adjacent to his.

Though Theo’s house was saved, several of his 16 acres burned in the Station Fire. About 20 Altadena Heritage members might remember seeing a miracle of nature in Spring, 2010, when he hosted a program on fire safety and a hike through head-and-shoulder-high yellow and purple blooms of “fire followers.” Pyrogenic flowering is defined as “the fire-adapted trait of an increase or a peak in flowering after a fire event,” that allows plants to persist in fire-prone environments (such as our foothills.) The program was a once-in-a-lifetime opportunity; most burned areas within Angeles National Forest were closed for a few years and we wouldn’t have experienced this phenomenon were we not invited to witness it on private land. 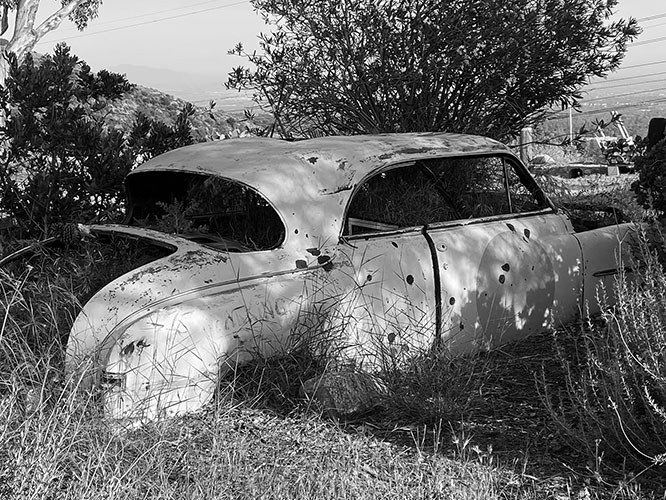 The temporary increase in size and rate of flowering in May, 2010, was astonishing! Theo generously shared the bounty of flowers with his fellow Altadena Heritage members, and the Altadena Fire Department sent a representative to school us on safety measures such as creating a “defensible area’ around homes. This includes removing trees planted in very close proximity to your house. He described cypress trees within a foot of a structure as akin to “having roman candles next to your house” if they catch fire.

Theo lives on happily in his fire-prone environment. Post-retirement he travelled the world for years, became an ordained Science of Mind minister, and mounted “poster papers” on JPL’s JUNO project to Jupiter at science conferences. Today he mostly stays closer to home, keeping an eye on the mountains and enjoying his views. He ventures out for shopping and weekly violin lessons, and we’re talking about a hike to Owen Brown’s restored gravesite, which he hasn’t yet seen — but wants to.