The Animal Healer – An Interview with Cleo Watts 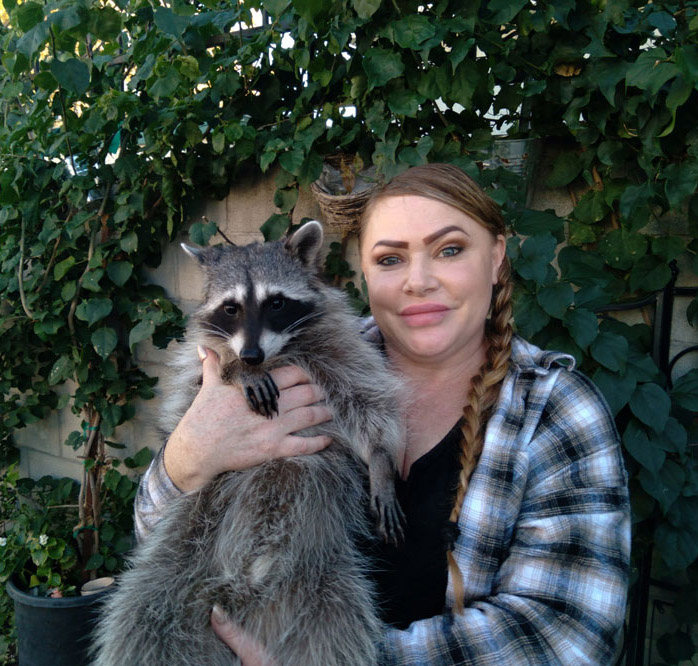 Behind a modest home on Altadena Drive is another smaller home with some unusual occupants. Two people, 11 squirrels, four parrots, a full-grown raccoon, two baby opossum and a couple very friendly chihuahuas. The human in charge of this menagerie is Cleo Watts. You may have seen her on Next Door. She’s an official “Small Mammal Wildlife Rehabilitator”, certified by the California Department of Fish and Wildlife. Over the past 20 years about 1,000 injured wild animals have recovered under her dedicated and knowledgeable care.

What animals do you take in the most?

“Squirrels are the most common patients. One baby squirrel I cared for fell or was pushed from its nest. It was only a few days old with no fur and its eyes were still shut. An x-ray showed its tiny body had five broken bones.” For several weeks she fed it with a syringe in a heated cage. (Baby squirrels can’t self-regulate their temperature.) It survived.

Then she showed me two larger squirrels. “Both have head trauma. This one has seizures and this one goes in circles. We keep them for up to a year and they do come out of it. But sometimes they don’t, and if they don’t, they go to a sanctuary.”

“Since last October”, said Cleo, “we’ve cared for and released 99 squirrels. Some people ask me why I waste my time with squirrels. They call them tree rats. I see them as living creatures that deserve respect.”
Parrots are also familiar to Cleo. She had four parrots when I visited. One had a bad wing break in two places. “If the parrots are young they can be handled”, she says, “but if they are older and wilder, it’s best to keep contact to a minimum.”

How do animals get injured?

“A lot of animals come in because of tree trimming, car accidents, the mother dies or is eaten. Ground squirrels are dropped by hawks often at the golf course. Parrots are hit by cars. One squirrel — a nursing mom ­ — fell out of one of the big trees on Christmas Tree Lane.”

Do you have a favorite patient right now?

“That would be Rocky (a raccoon). I got him on Mother’s Day. His family, the mother and three siblings were attacked by a coyote. The finders said Rocky was curled up on patio.”
Today he’s happy, healthy and very friendly. He eats all kinds of fruits and vegetables, chicken, salmon, dog kibble and scrambled eggs. Like a typical racoon he douses his eggs in water before eating them. “He can forage and hunt,” says Cleo, “but he is also friendly and will approach humans. So he’ll have to go to a sanctuary instead of being released to the wild.”

How did you get your start in animal rehabilitation?

“I’ve always taken in animals, if I saw a bird with a broken wing or a kitten or opossum on the road. If the mother got run over and the babies got scattered, I’d scoop up two of them and take them in. In 2002 I started volunteering for Bottle Baby fostering for kittens. And then people said, ‘Oh hey, I found this squirrel. It fell out of the tree. It’s a baby. Can you help me? You do kittens. It has to be similar.’ So I took one in.”
“Later people would sometimes say, ‘Oh you love animals. You want to be a vet.’ I said, ‘No. I don’t want to be a vet. I want to be like their nurse. I want to be hands-on with animals.’ Then people would say, ‘Oh you want to be a zookeeper.’ ‘No. I don’t want to be a zookeeper. I want to work with animals.’

How did you get your animal rehab license?

“This lady from Squirrelmender reached out to me on Facebook and she said, ‘Are you licensed?’ and I said ‘No.’ And she said, ‘Well I think you do really good work and I really think that you should be licensed.’ That was last year. She said, ‘This is what you have to do. You have to have in-take forms. You have to have the cages set up like this.’ I have the book Standards for Wildlife Rehabilitation. I studied that. Before this I was a dental assistant in La Verne. Then the pandemic came along. The pandemic is when I really started saying yes to all the calls for help.” Cleo quit her dental assistant job and started animal rehab full-time.

Where do you take the animals for vet care?

“I use vets in various places, depending on their specialty. One vet who specializes in skunks is in Loma Linda. An exotic animal vet is here in Pasadena.” 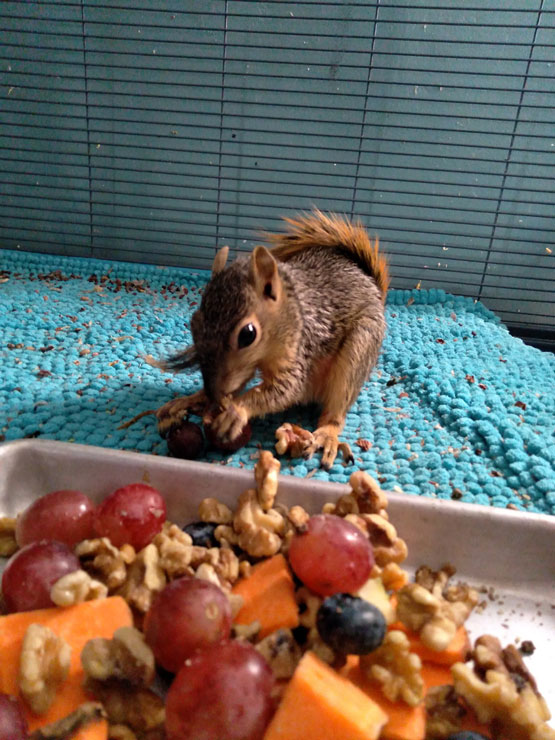 How do you pay for all this animal care?

“I get some donations. $25, $50 sometimes $100. X-rays cost $120. But most of the costs my boyfriend pays. (Laughs) He’s a sweetheart. Also when it gets crazy and I have too many baby animals I’ll go on Next Door and say, ‘I have this baby that needs this and this baby than needs that.’ I’ll take pictures of what’s needed and I’ll say if anyone would like to donate right now it would definitely be appreciated. I had someone donate an incubator. People bring me fleece blankets that they’ll make. They’ll sew custom blankets weighted with rice so I can keep the babies warm. Sometimes people will think of me when — unfortunately — their pet passes away and they have extra-food.”

What happens if an animal can’t be saved?

“A really exhausting part is baby season in the spring. I have to get up every three hours to feed them. That’s what kicks my butt. But I guess the hardest thing would be an animal that I can’t save. They may have internal bleeding or head trauma. That’s the hardest. So I’ll hold them until they pass. Just comfort them.”

What the most satisfying part of your work?

“It’s most satisfying when you release them into the wild so they can live life like they should. That’s the reward. There’s nothing like it. I had many jobs but I’m naturally nurturing. I get gratification with wild animals.”
If you would like to help Cleo in any way you can contact her at cleowatts43@gmail.com