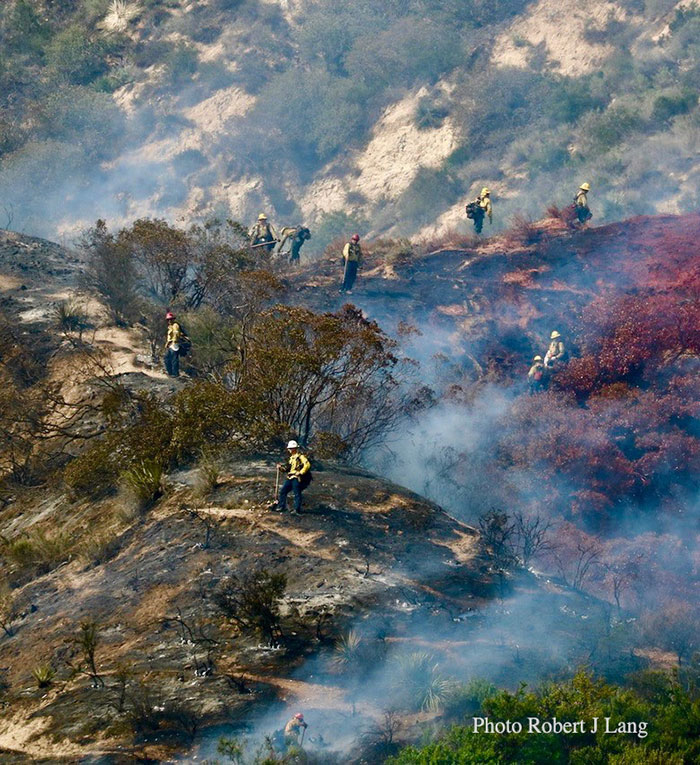 Our scenic mountain backdrop is Altadena’s greatest amenity, yet also poses our greatest danger. The precipitous slopes of crumbly rock are covered with shrubs and grasses that have evolved to burn, and in the hot, dry conditions that prevail most of the year, a small blaze can rapidly become a raging fire storm. There are homes in our critical fire zones, La Viña, the Meadows, Alzada, Loma Alta, and people living there are always conscious of the possibility of fire. Fire professionals make a distinction between “interface” when the edge between wild land and structures is clearly defined by houses grouped together (think The Meadows), and “intermix” where houses are scattered (think Alzada and the streets off Chaney Trail) which are more difficult to protect.

Even we who live miles down the hill from the brush-covered mountains in flatter, more urbanized areas of Altadena, mustn’t be complacent. Persistent heavy rains following a fire can bring hillsides down as they did in 1938, when mud and rock flowed past Washington Boulevard.

We are protected by debris basins at canyon mouths, but if they are overwhelmed by a prolonged storm event (as occurred in 1997 at Rubio Canyon), we will also see devastation. Nor are we immune to wildfire. Imagine a fire coinciding with one of the occasional mighty winds that roar down the mountain, burning embers can fly a mile or more and ignite multiple fires. When a fire gets out of control in a gale it is impossible to stop until the wind drops.

Our first line of defense is the Los Angeles County Fire Department, the largest fire department in the US in terms of area covered, and second largest after New York city in personnel. It is a vast enterprise, with 176 stations, 3,300 fire suppression personnel, with the ability to call up many additional resources outside the department. Other cities will send engines and crews when needed. The Angeles National Forest has its own wildland fire specialists including seasonal crews, a critical component of Altadena’s fire protection. Prisoners who have received training in fighting wild fires may be drawn from Julius Klein Conservation Camp in Azusa Canyon when needed.

The LACFD is a well-oiled machine, with a strict command structure, excellent communications, highly trained personnel, and protocols that facilitate quick decision making.

Fighting a wildfire is a lot like war. To prevail, combatants want to have the best weapons available, an established chain of command, and failsafe means of communication. Everyone knows that firefighters are gear-heads and equipment freaks. Just look at one of their magnificent engines, polished to a high shine. This kind of pride and attention to detail manifests itself throughout: tools and gear are meticulously maintained and carefully stowed, everything in its place to be retrieved in an instant. There are various kinds of gear for different kinds of fires, and methods for handling hoses. And communication, every firefighter has a radio. Great communication is essential as fires rage, smoke billows, and numerous crews work in rough terrain. That is why every firefighter carries a radio with multiple frequencies tuned to an administration channel, command channel, air to ground channel, tactical channel (for keeping in touch with their crew), and often channels for Forest Service and other agencies involved in the fight.

When a fire is spotted in the brush covered slopes above Altadena, possibly by a County fire department patrol (most likely a concerned citizen phoning it in), Altadena’s two Stations, 11 and 12, spring into action. From training and experience firefighters are skilled at predicting fire behavior based on topography, wind, humidity and vegetation types, and are careful to maintain routes of escape and withdraw when things get too dicey. Still, in California some firefighters die every year.

One of the first decisions is to establish who “owns” the fire. If it’s on Forest Service land it’s an FRA (Federal Response Area), if state or local, it’s SRA of LRA. Establishing ownership is important, it determines the agency that will lead suppression efforts and, very important, who will pay for it. It may belong to County, to Pasadena, or the the Forest Service. Chain of command is critical to mounting an organized and coordinated response. When a fire first starts, the local station captain may be lead, but if a major wildfire develops, it gets a name and command goes up the line and until an “Incident Management Team” of top brass takes charge. But the initial response is an organized scramble to get resources to the fire and contain it as quickly as possible. Calls are made to nearby stations to assemble at a staging point (often Farnsworth Park in Altadena), ready to deploy if needed.

A standard wildfire-fighting strategy is known to firefighters as AFP — Anchor, Flank, Pinch. To “anchor,” a base is set up, generally near the origin of the fire and as close as feasible to water and a pumper. From the anchor point, fire lines are cut through vegetation on right and left side to “flank” the fire and prevent it from spreading laterally, and hoses are run up the lines. These are usually deployed from Smokey Packs, backpacks containing lengths of light-weight hose laid down as a firefighter walks up the line. Smaller 1inch diameter “attack hoses” are attached to the smokey pack line at intervals providing water to fight the fire all along the flank. The goal is to get to the head of the fire and “pinch” it off, surround it, and extinguish it. This is where air support can be extremely helpful. Aircraft can’t put out a fire, but carefully dropping water or retardant at the head of a fire slows it down, giving crews time to mobilize, contain a fire, or protect structures.

Aircraft are an increasingly important and effective tool in fighting wildfires.

Each year the county leases two fixed-wing Canadair Super Scooper aircraft from Canada, “Quebec 1” and Quebec 2”, purpose-built planes that can scoop up 1500 gallons from any nearby body of water to drop on a fire. A variety of helicopters and other fixed-wing aircraft are available, including modified DC 10 that can drop 12,000 gallons of water or retardant. Cost is always a consideration, so jumbo jet tankers are saved for the most dire situations.

A back fire is a tool in the firefighters’ arsenal that is occasionally used to great effect. A raging wildfire consumes an immense amount of oxygen thus creating a draft towards the fire.

A fire set nearby will move towards the existing fire, thus eliminating fuel and limiting its spread. “Theo’s View” on page 6 in this Newsletter is a dramatic illustration of how a backfire helped save La Viña in 2009.

In a wildfire, first priority is to save lives. Firefighters always check homes or other structures that might be in the path of a fire, encourage anyone they find to evacuate, and provide help as needed. 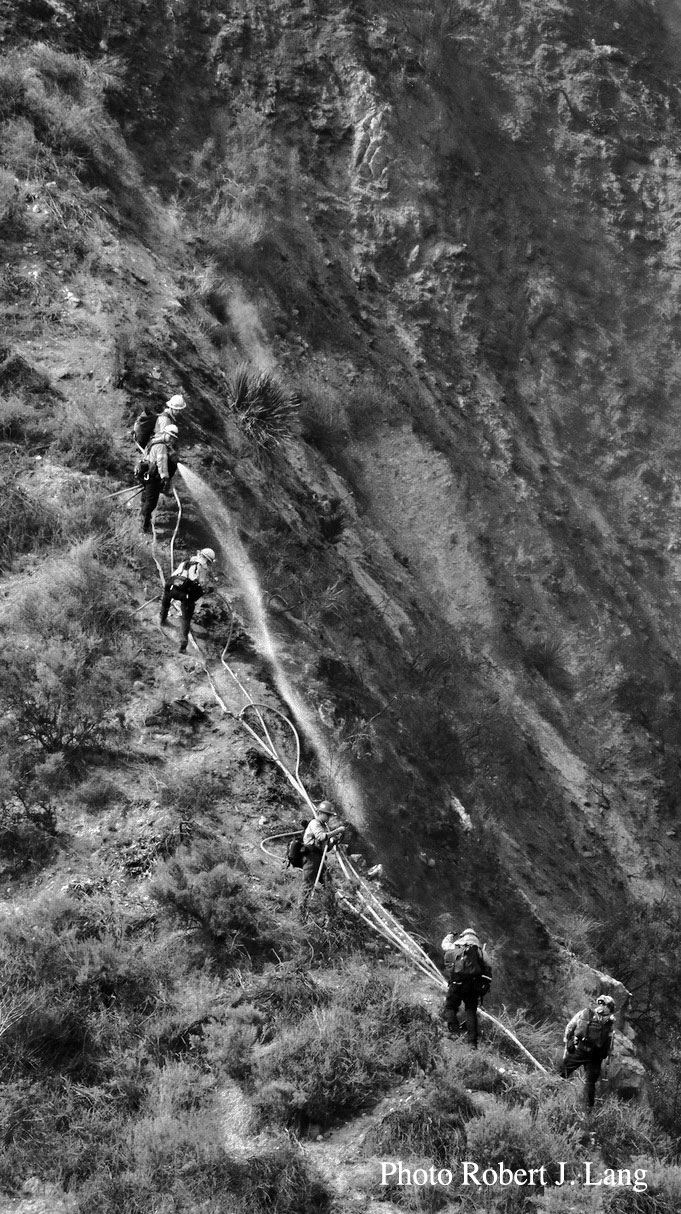 In the LACFD, all firefighters are trained in Emergency Medical Technicians (EMTs). (In fact, calls to the department for medical assistance far exceed calls to fires, and all firefighters are EMT certified.) They are always careful with their own, too, ensuring an escape route for personnel and equipment.

Second priority is to save structures; firefighters will make every effort to save homes unless they assess that doing so will be just too dangerous. This is where measure taken by the owners make a big difference. Is the house defensible? Are there flammable trees and wooden structures like decks or pergolas adjacent to a house that will ignite easily? One important service the County Fire Department offers to save homes, and make fire suppression easier, is yearly inspections in high fire-danger areas to make sure that homeowners cut weeds and brush near their homes to create an environment that is defensible.

Natural vegetation is often allowed to burn until a situation arises where lives or structures are threatened, or conditions make it possible to fight and contain a fire. In many situations — like the rugged and precipitous terrain of the San Gabriels — there is often no choice but to let it burn. Fact is, fire is part of the natural cycle of the chaparral that cloaks our Front Range. Periodic burns clean out dead wood and rejuvenate the biome, destroy many plant pathogens, and the ash makes important soil nutrient available for new growth. Fire-following annuals sprout from long-buried seeds that grow only after exposure to fire or chemicals released by charred wood, and evergreen shrubs re-sprout from stumps and buried roots. In nature, fires in this vegetation type occur about three times a century, but human habitation increases frequency, which can lead to native flora eventually being replaced by shallow rooted grasses and annuals. Without deep-rooted shrubs, there is more erosion, and this is exacerbated by burned soil that tends to repel water, decrease infiltration and increase flooding. Mud slides and flooding frequently result.

Building on chaparral covered slopes is, and always has been, a bad idea, but many want to live in a natural environment, and everyone loves a view. Homeowners put their trust in firefighters to save their home, because they know they will always give it their best effort.

I want to gratefully acknowledge the assistance of Engineer Campbell and Firefighter Dan Carlson from Altadena Station 11, who spent over an hour filling me in on how the LACFD functions in wildfires. I am also grateful to Captain Daniel Clegg who has recently started his command at Station 12, who generously shared his knowledge and clarified a number of issues.