The Owen Brown Gravesite Committee* wants everyone to know that a magnificent plaque honoring Owen Brown (son of abolitionist John Brown, whose failed raid at Harpers Ferry VA in 1859 was a spark setting off the Civil War) now occupies a marble wall in Altadena’s Mountain View Mausoleum. Along with Owen’s gravesite, the plaque is among the very few memorials to the Civil War in California. Much more accessible than Owen’s grave, the plaque is also a memorial to the Abolitionist Movement.

About 80 people attended its unveiling Nov. 4, and we encourage others to visit —the mausoleum is a magnificent 1920s structure worth seeing even without the plaque! Mountain View Cemetery (of which the mausoleum is a part) is Altadena’s oldest business, founded by by the Giddings family of abolitionists
in 1881.

Owen was at Harpers Ferry with his father and two brothers, and was one of the few to escape being shot during the raid or hanged for treason. After living as a fugitive for 20 years, Owen settled in Altadena’s foothills and became a local celebrity. When he died, 2,000 attended his funeral and he was buried here.

We unveiled the 5X3 foot plaque Nov. 4 with help from 5th District Supervisor Kathryn Barger and developer Tim Cantwell (pictured), who have been working with our committee to save this history. 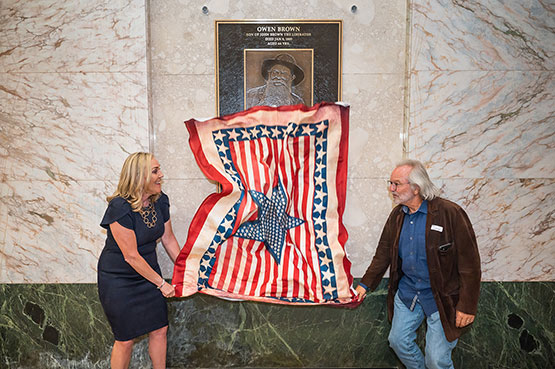 * The Committee is chaired by AH representative Michele Zack, members are Marietta Kreulls representing trails, Diane Marcussen for the Town Council, and John Burton from the Meadows neighborhood, where the gravesite is located.