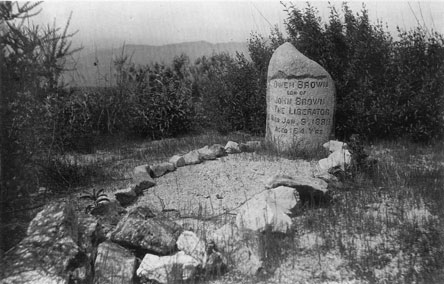 Abolitionist John Brown failed to spark a slave rebellion in his 1859 raid of the US Armory at Harpers Ferry, but his attempt is often referred to as “the first battle of the Civil War.” His son Owen participated, was the raid’s last survivor, and is buried on a hilltop that overlooks Altadena’s La Viña housing development, Millard Canyon, and the Meadows neighborhood. This site and associated history is being preserved by the Owen Brown Gravesite Committee; we are overseeing the conditions La Viña’s developer Cantwell Anderson agreed to (basically a land swap plus cash) in exchange for building permits from the County.

We have been meeting since April 1, 2021. The developer purchased the 6-acre gravesite in 2017 (to be placed in a land conservancy) and committed further to provide $300,000 for educational programs and site improvements once he gains permission to build 18 final homes in La Viña’s six-acre “donut hole” originally zoned for a school. A school never happened in the 20 years since La Viña’s first 272 homes were built, the change in use required new permits.

In these eight months, the most surprising thing is how much our committee has accomplished despite the Community Benefit Account not yet being funded. This is because Cantwell Anderson is still working on gaining final permissions for the project. (The situation of construction permits taking longer than anticipated is something many can relate to!)

It is a tribute to the cooperation and good faith existing between the Committee and developer Tim Cantwell that the latter has advanced $13,000 to restore the gravesite and pay contractors for initial work. This amount will be deducted from the $300,000 commitment his company made when he receives final permisssions and funds the Community Benefit Account. It is a situation LA County Department of Regional Planning (DRP) — which supports our Committee by running ZOOM meetings, documenting them and other business, and administrating the Community Benefit Account — has never seen before: a developer advancing money “on trust.”

So what have we achieved so far? Last summer the physical gravesite was restored, and Owen’s original gravestone returned. This restoration was also completed through cooperation, this time between the Owen Brown Committee and Save The Altadena Trails (STAT), the group that successfully sued a former gravesite owner over public access to it back in 2003-04. In the final adjudication, STAT gained the legal right to place a monument on a sloping promontory, Little Roundtop, Owen’s final resting place. At that time, the original gravestone was missing (see altadenaheritage.org Fall Winter 2018 Newsletter for full story).

STAT is still represented by attorney Paul Ayers, who volunteered to find the correct spot to put the gravestone that had been kept in a secure location since its recovery in 2012. He is an expert in “forensic photography,” and used the technique of lining up ridgelines (which change little) from archival photos of Owen’s gravesite to determine its original location. A challenge was that the hillside has eroded slightly since Owen’s burial in 1889, and his head (and headstone) would have been in an awkward downhill position without mitigation. Altadena Heritage volunteer Mark Goldschmidt worked with the contractor in designing an unobtrusive low retaining wall, back filled with soil, to create level ground for the restored grave.

More major progress is that our Supervisor, Kathryn Barger has agreed to “co-nominate” Owen’s gravesite (with our Committee) as an LA County Landmark as further protection against development. Altadena Heritage first applied for this status in 1989 and was turned down!

Times have changed, but we are taking no chances this time — and preparing a thorough application under the direction of our Project Historian Dr. William Deverell of USC and Sian Winship, a historic restoration specialist. Once the gravesite becomes a County Landmark, State and National designations will possibly be pursued.
We’re also in discussions with the Santa Monica Mountains Conservancy to take possession of the site, and guarantee care and public access in perpetuity to it.

A very supportive partnership with Pasadena Unified School District has allowed us to move forward in planning teacher training so students will learn about the abolitionist hero buried in our midst. Anchoring this training and classroom experience will be an exciting documentary film relating the Brown Family story and the civic project of restoring Owen’s gravesite. Altadena filmmaker Pablo Miralles has done preliminary work (with footage of the triumphant return of the gravestone and an interview with Harriet Tubman’s descendant!) and will complete the film once the Community Benefit Account is funded.

Our Committee consists of four volunteers. Diane Marcussen represents the Altadena Town Council; Marietta Kruells our trails community; John Burton, the Meadows neighborhood; and me, Michele Zack, Altadena Heritage. More community partners are in the works: Mountainview Mausoleum and Cemetery and Altadena Historical Society also look forward to collaborating with us to ensure this history is never lost. 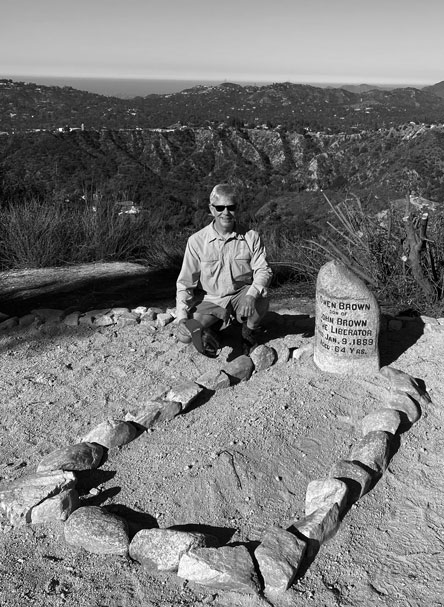 Gravesite 21st Century with Larry Wilson of the Star News.