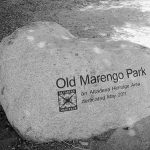 On Saturday, April 24, a group of 18 Altadena Heritage volunteers spruced up Old Marengo Park. Happy Birthday, little park! Amazing that this swatch of land, a public right of way created when Woodbury Road was widened and realigned in the late 1960s — celebrates its 15th birthday this year as a park.

For 40 years, the county maintained this piece of land by spraying Roundup on it once or twice a year — it was a true wasteland. But beginning in 2005 when the Altadena Watershed Committee formed (at first a committee of the Town Council) many groups, led by Altadena Foothills Conservancy and Altadena Heritage, began transforming it with a “City Make Over” grant from Metropolitan Water Distict. Our then – Supervisor Mike Antonovich chipped in, as did Pasadena Water and Power, which provided water to the property at the very end of its water district. Work was ongoing between 2006 and 2007, but once complete, Altadena Heritage took over its maintenance with help from the LA County’s Public Works.

Old Marengo Park has beautified this part of Altadena along Woodbury Corridor, sparked the interest that led to the redesign and planting of Woodbury median, and finally, to adding more street trees along this part of Altadena’s boundary with Pasadena. It is now indeed a lovely gateway into our community.

Volunteers assembled on a Saturday morning in April for a park clean-up and weeding party. Old Marengo Park was designed in 2005 by Mark Goldschmidt of Altadena Heritage. Several groups, individuals, and Supervisor Mike Antonovich contributed to building it.