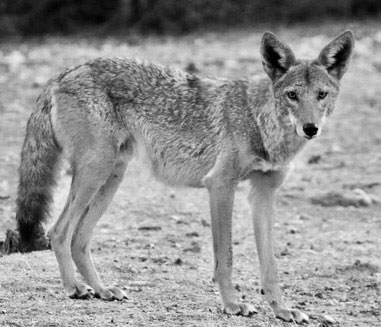 In the lore of many Native American peoples, Coyote has been around from the beginning: he was there at creation, he is a link to the other world. Coyote is “the Tricky One.” He is bad, but he’s also good, he’s always changing, no one likes him. But long ago Coyote took pity on humans because it was winter and they were dying of cold. Fire belonged only to the Fire Beings who guarded it fiercely, but Coyote tricked them, stole it, and gave it to humans so they could live.

It’s spooky seeing a coyote walking the street in broad daylight. He is wary, he is watching you, he is not afraid, and he is definitely a wild beast. Sinister, canny, intelligent eyes, it’s easy to see him as a mythic character: mischievous, menacing. and unpredictable.

Above all, coyotes are adaptable. They thrive in all kinds of environments from Alaska to Belize, and from wilderness to urbanized areas like Altadena. There are 19 recognizable sub-species, ours are a small desert breed — 25 pounds or less. Omnivores, they subsist largely on rodents and some larger animals, carrion, fruit, berries, insects, domestic animal dung, roadkill, garbage, fresh grass.

Coyotes mate for life, a couple raises 3 to 7 pups in winter in a burrow the pair excavates, a hollow log, or some other sheltered spot. Parents bring food to the den and regurgitate it for the pups In fact, the male brings food in the same manner to his mate when she’s pregnant. Some pups remain to help take care of the next litter, but at 6 to 10 months most disperse to find their own territory; they mature fully by three years. All coyotes can breed with wolves and domestic dogs and produce fertile offspring; DNA studies show that there is a little of each in most coyotes. Coyote-domestic dog crosses are rare because male dogs don’t help with child-rearing, and estrus differs. “Coydogs” are way more intelligent than dogs and have a reputation as difficult pets.

Coyotes scent-mark their territories to let other coyotes know to keep away. But they are gregarious, too. Unrelated individuals, young animals without territory, non-breeding females for the most part, form packs for companionship and to hunt large prey. Packs work together with tactics of distraction and harassment to bring down animals much larger than themselves such as deer or large dogs. With 11 recognized “vocalizations” plus an expressive body language and scent markings, coyotes have a large vocabulary to communicate with each other.

Attacks on humans are rare, only 2 known fatalities. One in Nova Scotia, the other in a Glendale park in 1981, when a picnicking family’s three-year-old daughter ran out to give a piece of chicken to the doggie, was savaged, and killed. NEVER GIVE FOOD TO A COYOTE, or any other wild animal, for that matter. The coyote you feed will remember your scent and stalk you ever after. Urban coyotes are wary but have little fear of humans, and may take an interest in the dog you are walking.

Many Altadenans would like to see coyotes eradicated from our midst. Not possible! Also not a good idea, these beasts occupy an important niche in our community, scavenging and helping keep a lid on the rodent population. They are not about to move back to the chaparral. When local coyotes are eliminated, others quickly move in. Furthermore, it has been proven that when the population dips, females go into “hormonal overdrive” and bear larger litters that soon make up for any loss. We must learn to live with them. Watch your pets, keep them indoors as much as possible. Clean up what attracts them — fallen fruit, pet food, bird feeder excess, garbage.

If you feel you are being stalked, don’t be afraid, just wave your arms and make noise, let them know you are aware. Look at them and they look back, and you know you are dealing with deeply intelligent beings.