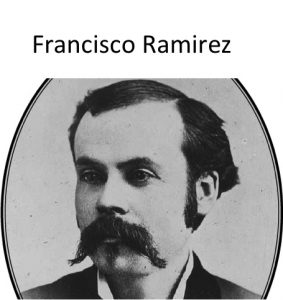 Come learn about California’s little understood but crucial role in the nation’s greatest conflict, and about an equally unknown local Latino hero.

Historians Paul Gray and Michele Zack will take us back to the Pueblo of Los Angeles in its first years as an “American” town, via an illustrated talk and dynamic conversation.

In 1855, in the run-up to the Civil War, 18-year-old printer’s apprentice Francisco Ramirez founded the English/Spanish language newspaper El Clamor Publico to express ideas of liberalism and democracy far in advance of this time and place. California had become the newest state in 1850; in its southern half, Spanish-speaking Californios made up most of the population. Misgivings about a new national identity after Mexico’s loss of California to the United States, the brewing division within the Union, and a pueblo governed by “Southern-minded” elites supporting the nascent Confederacy created a dangerous storm for young Ramirez, who spoke eloquently for social and racial justice against the tide of history.

Paul Gray is an attorney and bi-cultural independent scholar who wrote A Clamor for Equality (2012), the first book-length biography of Ramirez. Michele Zack is an author and historian who partnered for eight years with the Huntington-USC Institute for California and the West in a program that integrated California history into American History to make its teaching more exciting, relevant, and inclusive. Both Gray and Zack are past recipients of the Pfleuger Award for excellence in writing local history, as well as other local, state, and national honors.

This program is co-sponsored by Altadena Heritage, a partner in the Altadena Library’s year-long series bringing more Latino history and culture to our libraries. Time and location to be announced.

Altadena is an unincorporated community of 43,000 sited on an outwash plane beneath the abruptly rising San Gabriel Mountain Range and between the Arroyo Seco and Eaton Canyon.
Altadena is 13 miles northeast of the city of Los Angeles and directly north of the city of Pasadena. Founded at the time of Southern California’s land boom of the 1880s, the town’s uniqueness derives from a distinct history, “live free or die” culture, and stunning physical setting.
Architecturally diverse with significant examples of every style of home from modest Craftsman bungalow to Italianate mansion and Modernist gem–Altadena has also been a racially diverse community since the 1960s.

At Altadena Heritage we put on events and programs every year. Our board of directors – a varying group who have joined because they love where we live and want to help Altadena become a more lively and vibrant community – gather once a month and we plot.
We ask ourselves: How can we raise awareness of what we have here in our community? How can we help our citizens become more connected to each other, to this place and to its history? What would make our community better and how can we promote positive change?
Members propose ideas for programs, events, and newsletter articles to address these questions, and our board works together to make things happen. This is the community service we do at Altadena Heritage, we find it enjoyable and deeply gratifying.
The fact is, our unincorporated community needs Heritage; we have no city government – and maybe that’s good – but this means we have to advocate for ourselves, to lobby for the community we want, and to work with others in a positive, constructive way. Because we’ve been active for over 30 years, and incorporated as a non-profit 501(c)3 organization since 1987, we have gained respect and standing. We give Altadena a voice that is heard in town and by the County.
In our office at the Community Center we maintain an archive on most buildings in Altadena, and virtually all built before 1940. Please make an appointment to research the history of your (or any) home. We are currently working to organize and update the archive and to migrate our computer database on to a modern platform.

• Fabulous annual holiday celebration – every year in a different Altadena gem
• Annual Golden Poppy Garden Awards and garden luncheon in a beautiful Altadena garden
• Tours of local homes and showcase gardens
• Invitations to special events like the Boho-Highbrow event, and our AHA!s – Altadena Heritage Areas where we hold a street party and celebrate special Altadena enclaves and neighborhoods
• Heritage of Abundance – past programs and workshops have included:
Urban homesteading & sustainable living
Restoring your old windows
Starting native plants and produce from seed
Water-wise landscaping
Growing fruit in the shadow of the San Gabriels
• Receive our newsletter
• Get access to our architectural archives and database
• Have a voice in advocating for a better Altadena

Altadena Heritage engages the community with a variety of educational and celebratory public events. We have only one general members’ meeting each year --our Annual Members Meeting & Holiday Celebration -- a festive occasion where we also vote in board members. Other events are open to the public, either free or with a member discount.
We hold our Golden Poppy Garden Awards & Garden Party each spring in a different glorious Altadena garden. Other events repeat irregularly when we are inspired. The AHA! (Altadena Heritage Area) Program celebrates special places or neighborhoods around town, and we have dedicated seven since 2000, most recently the “Equestrian Block” (2013) which honored Altadena’s Equestrian Heritage with a lively program at Altadena Stables.
We offer most of our educational events at Altadena Community Center, for free or at nominal cost. Our Heritage of Abundance Sustainability Series has addressed such topics as Growing Fruit Trees in the Shadow of the San Gabriels, a Tomato Workshop demonstrating ways to process home-grown tomatoes, Old Window Restoration, Affordable Gray Water Systems, Make your Home Energy Efficient, and many more. A recurring theme we’ve revisited over the years has been water: how it gets to us, and how we can use it efficiently.
We’ve sponsored a few home/garden/studio tours over the years, and special one-off programs, include such past events as Breakfast at Nuccios, our tour of Homes of Altadena Artists, and our Modernist Homes in Altadena tour and many others.