Altadenans Know Why Water is Worth Fighting For

Altadenans Know Why Water is Worth Fighting For 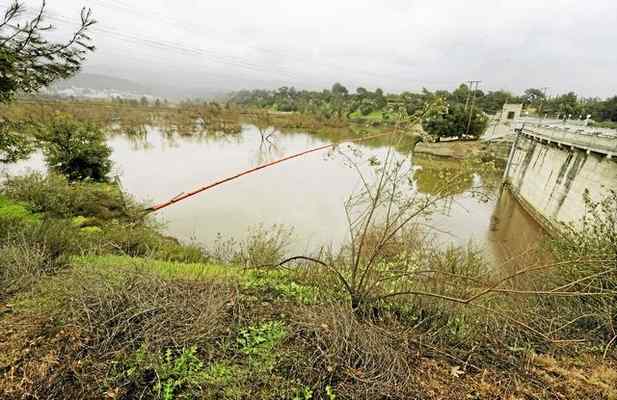 Water builds up after a 2011 storm behind Devil’s Gate Dam at the Altadena/Pasadena border. (Photo by Walt Mancini/Southern California News Group)

Since water’s for fighting here in the Golden State, Altadenans are doing a very good job of holding up their part of the California bargain.

As an unincorporated area with a strong local identity but just an advisory-only Town Council to elect — along with a Los Angeles County supervisor with 2 million other constituents — Altadenans have always been good at shows of self-governance that involve simply showing up.

That’s why it shouldn’t have been a surprise that an overflow crowd of something over 100 locals turned up at the Community Center Thursday night for a forum about a county sediment-removal project and a proposed pipeline, issues that elsewhere might draw nothing like a large group of passionate, informed citizens.

But, outragewise, the pipeline in discussion has the additional bonus of appearing to be, while a county project, designed mainly to benefit dreaded Pasadena, the town’s large and powerful southern neighbor. A $28 million grant from state water bonds includes not only monies to remove sediment behind Devil’s Gate Dam, which has been controversial enough, but also to build a pipeline east from (Pasadena’s) Arroyo Seco to spreading grounds in (Pasadena’s) Eaton Canyon to help remove excess stormwater runoff. And the proposal is to build that pipeline along New York Drive and Woodbury Road in Altadena, with the traffic and other disruptions such digging brings.

I was asked by Altadena Heritage to be the moderator for the forum, the panel for which was made up of proponents and opponents of the two intertwined projects. Even that became controversial, as the Star-News is on record as editorially opposing what we and others call the Big Dig in favor of a smaller dig and fewer dump trucks over fewer years, though we agree that proper flood control calls for some sediment removal. Some county officials asked that I not take part.

As a naturally ornery native Altadenan myself, I wouldn’t budge, and promised to be fair in my moderation, which I like to think I was, as no punches were thrown and I made sure everyone had time to speak their piece. It was a great group and a fascinating discussion. The county sent its big gun, Mark Pestrella, its new director of Public Works, along with Chris Stone, his assistant deputy director. Brad Bowman, Pasadena’s Department of Water & Power engineering manager, bravely faced the crowd. Tim Brick and attorney Mitchell Tsai represented the Arroyo Seco Foundation and the local Audubon Society, longtime Big Dig opponents. Altadenan Elizabeth Bour represented the Hahamongna Watershed Advisory Committee.

Jeez, your Altadenans do their homework, with pointed questions such as: “Considering the $28 million grant was obtained by stating that 4,800 acre feet of water would be transferred annually: With Pasadena’s revised estimate of a much smaller 700 acre feet annually, how can the project be considered cost-effective?”

Pitchforks were not raised and all outsiders were allowed to leave town at evening’s end. But powers that be understand that as they proceed, they are dealing with an incredibly well-informed citizenry.

The charming and beloved Sheldon Epps, for 20 years the artistic director of the Pasadena Playhouse, was feted Monday by the women of the Friends of the Pasadena Playhouse, who attempted to name the historic theater’s green room in his honor after he stepped down this year. Epps accepted in the most gracious manner possible: He insisted that the dressing rooms and pre-show gathering area for actors be named instead in honor of his late parents, Kathryn and St. Paul Epps. So it’s now the St. Kathryn Green Room. Eagle Scout Joshua Quan, a Marshall Fundamental grad, painted the changing rooms, and the steamy basement place where thespians have gabbed for 93 years was generally spruced up. “My parents first brought me here in 1964 to see Ethel Waters in ‘The Member of the Wedding,’ and I fell in love with the magic onstage,” Epps recalled. Thanks, Sheldon, for making more of the magic for us. … If all publicity is good publicity, then maybe the Carmen Puliafito scandal is why there were such long lines to check in Tuesday at Pasadena’s Hotel Constance, allegedly the former USC med school dean’s favorite place to party.

Write to the public editor at lwilson@scng.com.